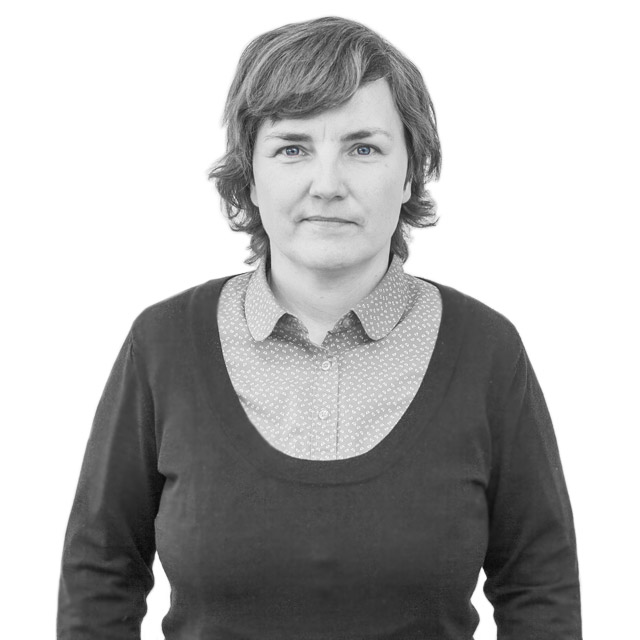 
when I don’t travel the world exploring or designing experiences, you’ll find me living in Europe. Even though I like intensity and speed in my life just like when I play ice hockey league games pumped with adrenaline, I'm all about curiosity and value impact. I advocate for simplicity and have a gift of being able to demystify the complex.


Now you might be thinking, Is she worth my time, should I read any further? I invite you to discover the answers fast in the following few sections...

Here’s What I Can Help You With...


I'm here to guide you to explore and find decisions for your business by applying Discovery Design Thinking Mastery And Innovation.


I foster communication between multiple cross-functional teams that not always tend to talk to each other — aligning and getting everyone on the same page solving the challenge together.


I am like your secret-weapon-connector, as I work with various teams and translate between them. I bring clarity to the process because different people speak different languages and have individual interpretations of the business.


I kill buzzwords, and fluff to demystify the jargon and focus only on what aligns teams together, getting everyone rallying behind the common goals.

I craft the exercises and journey in a very specific way to get your team to align allowing each individual to genuinely express their ideas from the beginning. This is crucial especially in workshops and brainstorms where often the introverts shy away and get overpowered.


I also focus on inner universe helping individuals to evolve.
(If one allows for it…)
Tackling the obstacle to innovation like the ‘imposter belief’, the phenomenon that is keeping so many trapped. We are our worst critics and enemies and it’s time to unlearn these false beliefs whispering “Why would anyone listen?, “What if I’ll be humiliated?”.


Are You Still Here Reading? Good.

If you are looking to uplevel your business through the Value-Driven Service Design, Customer & User Experience and Design Sprint Innovation,
here’s what you can expect from me as your Design Lead.


I would do you a disservice if I wouldn’t stress that using the design process alone will not solve it all.
To be able to trully innovate in your business we’ll also need to align your


And for all of you “Waterfall folks”, (Yes you know exactly who you are…)
Please, know that DESIGN Is Not A Linear Process.


*Regarding the methodologies and frameworks:
Every challenge might need its unique potion. Especially because Design Thinking is prescriptive, there is no such thing as a one-size-fits-all methodology or framework. Trying to use just one approach to everything could mislead your way of thinking, limit creativity and imagination.


Do you need help with?

How Do I Know If Your Skills Are Any Good?


Well, the smart thing to do is to get some feedback from the people I’ve worked with. But, let me help you and start with “you won’t find on LinkedIn - biography”, so here goes:


I am a different kind of Designer and Wanderer.

For me, solving a challenge is like traveling and exploring and has nothing to do with places or landmarks but with people and moments that unfold.
I explore inner and outer experiences navigating through complex challenges seeking evolution.


I started my ‘design and problem-solving career’ as a kid..


I am Slovakian, born in former Czechoslovakia and I grew up as a communist child behind the iron curtain.


During the cold war times, I begun one of my first creative sessions on plotting and designing my escape (fantasy) from the regime but soon realized it was not a feasible plan as it would bring a terrible consequences to my family if I would succeed to escape without getting shot, drowned or electrocuted trying to cross the border.


As a kid, I was told I’d never be able to leave my country and see the world or have an interesting job or freedom to be whoever I want to be. I was programmed to believe that this was as good as it gets.


Yet at night, I would read these amazing books that allowed me to dream and go on adventures together with the book's heroes. During the day I faced another side of my reality.


And, then one day, I saw the changes happen right before my eyes.


The wall came down.
The 'famous' Berlin Wall...


After a few years had passed, my first steps led me to England. The culture shock was hard as I was learning what it meant to be in a foreign land alone with only £200 in my pocket, and different mentality and customs.


I gradually made my way through working in London creative industry and one day got an offer to join Microsoft. This was a big career advancement opportunity and I took it. One could think I became a new Corp America.
I worked on the Creative Solutions Team. I was learning new skills and creating unique R&D products and projects mainly for entertainment clients.


I had my dream job as an Interaction and UX Designer, enjoying this cool moment in my career and still, something felt odd...


I was confused. I didn't understand why I felt lost and sad. It seemed that I had reached the pinnacle in my professional life, and yet, I still wasn't fulfilled.


I started to feel this unstoppable desire to fulfill my childhood dream to travel around the world.


I made a decision to incorporate travel into my lifestyle.


The day I handed in my resignation I felt this huge relief and excitement.


My family was worried about me traveling solo and couldn't comprehend why I would leave behind such a great job, money and ‘security’.


Despite all objections from friends and family I left.


I traveled solo around the world for two years, visiting 7 continents. Yes, I backpacked to Antarctica, swam in iceberg waters and danced with penguins.


Traveling across Latin America gifted me with a profound self-discovery experience through 'la abuelita' Ayahuasca.


I saw remote places I had always dreamt of exploring as a child.


During my travels, I had a rule that I would help others and volunteer leveraging my experience and knowledge. I simply wanted to give back and contribute. My maverick style of giving back and contribution opened up a whole new world of experiences. I’ve got plenty of crazy stories to share, so ask me later if you want to hear more.


However, this exposure also created a storm inside me. I dwelled on this huge dilemma as I traveled, trying to see what’s next.


And then the moment of inspiration came. I had to admit to myself that in my heart I was a born designer, adventurer, traveler and dreamer and loved it. But I also became aware of my calling to solve big challenges and help others to evolve.


During this moment of clarity, I also realized something even greater. I felt this unconditional gratitude that I was able to travel the world freely.


I am an advocate of travel as it’s the best education one can receive.


It truly is an eye and heart-opening experience. During my travels, my perception of reality shifted when I discovered that kindness in people far outweighed the opposite qualities.


But, there I was, standing at a crossroads in my life once again.


I could either keep on traveling for myself OR embark on a whole new journey of exploring how to build something greater than me.


To put it into perspective, for me, it was easier to cross remote glaciers or climb mountains than thinking of designing and creating businesses or ripples of movements that impact millions.


There I was, doubtful and scared of the unknown I was facing. I knew I was a talented and audacious designer, but I had no experience in being a creator of something far greater... I had no idea how to do it and felt way out of my comfort zone.


Hysterical laughter disguised my panic, I felt defeated, feelings were that intense.


What was staggering, I simply couldn't help it. I felt that there was no other way, but to give it a shot, to do it.


Fortunately, my curiosity and desire to make it happen were far stronger.


And that was it. I reached the point of no return and embarked on this new journey.


My new universe was born.


I am aware you most probably did not grow up in a communist country. And you have far greater opportunities from an early age that I had.


The difference between our backgrounds is that when I was growing up I saw no future but you probably saw more options than you cared about.


Your options are vast and that can feel paralyzing, not knowing which way to go.


No institution, religion, educational system or government will ever teach you or give you the knowledge and understanding that you receive from exploring the world and solving interesting challenges.


Yet, it all starts with you and your own internal universe.


My point is that you can not afford not to explore the unknown and evolve. It could be your most expensive mistake you might regret later in your life. Because as the law of the universe tells us “at any moment, you are either expanding or contracting, there is not such a thing as in-between”.


 The evolution of Zuzana Dobro


My extensive experience in multidisciplinary fields and my infinite curiosity for learning and self-growth naturally lead to my own evolution.


I’ve merged my passion for Adventure Travel and Human Evolution with my Design and Creative Problem-Solving Expertise.


Apart from the perpetual digital world mastery, I also love product design. I’ve created the SuperSingularity outdoors brand which allowed me to exponentially sharpen my entrepreneur and business acumen.

I now use my skills and talents to help businesses and coach individuals on their journey of providing incredible value to our universe.

Thank you for reading and start creating.

The universe needs you.


Whether you need to create a new product, elevate the current solution, or give your team an innovation experience, I can help you.
LET'S TALK